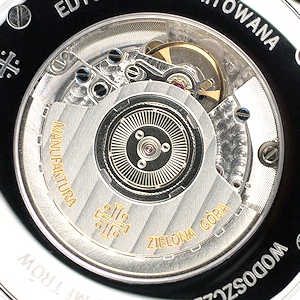 This type of movement was invented over 50 years ago and is nowadays used in most of mechanical calibers. The automatic movement uses the energy that is conveyed from the person wearing the watch. The person wearing the watch moves their hand and keeps the micro-rotor in motion. The micro-rotor is an element of the movement that is set in the middle of the caliber in our models. By moving forwards and backwards it winds up the mainspring which in turn conveys the amassed energy to other parts of the mechanism.

This way the owner of the watch is released from the duty of winding up the mainspring manually day-to-day. The watch, once it is taken off the wrist and put away, still works for at least another 40 hours (depending on the model of the caliber). All we have to do to put the mechanism back into motion is to wear the watch for couple of hours. During the time the mainspring will be wound up again which makes it capable of feeding the clockworks the required energy for another hours.

The legendary hand-wound movement also has its use in our models. It is modified and encrusted TOP version of the movement from the ETA 6498 series that used to be installed in the pocket watches. The clockwork is generally used in our most unique models – the limited editions and collector’s items of our manufactory.